"Codec" is a song by Zedd from his debut studio album, Clarity. It is the sixth track of (and the longest song on) both the standard and deluxe editions of the album. 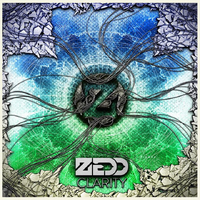