The topic of this page has a wiki of its own: Selena Gomez Wikia.

I Want You to Know
Selena Marie Gomez—born July 22, 1992, in Grand Prairie, Texas—is an American actress, singer, and fashion designer. Aside from music, she portrayed Alex Russo, the protagonist in the Emmy Award-winning television series Wizards of Waverly Place, and starred in the television movies Another Cinderella Story, Wizards of Waverly Place: The Movie, and Princess Protection Program. She also made a theatrical debut by starring in Ramona and Beezus.

Zedd was Gomez's date to the 2015 Golden Globe Awards, which sparked romance rumors, and it was first confirmed via Zedd's Facebook that they were working together on a song as well.

On December 5, 2014, Gomez revealed that Zedd would be working with her on her second studio album.[1] Three days later, she posted a picture of herself headed to the studio with a man's arm around her.[2]

Zedd and Gomez were still hanging out in January,[3] and on January 9, they attended Notch's Housewarming Soiree together. Two days later, the two of them attended the 2015 Golden Globe Awards together. On January 18, Gomez had to leave LA in order to work on her movie The Revised Fundamentals of Caregiving, posting on Instagram that she missed Zedd.[4] Later that night, the two of them Facetimed.[5] Two days later, Zedd posted a picture saying "I want you to know..." on his Instagram;[6] four days after this, on January 24, Gomez posted a picture of his arms around her, captioned "Hint #2 #iwantyoutoknow 💜".[7] On January 26, the two of them went bowling.[8]

On February 3, Zedd posted a picture of himself and Gomez in the studio with the caption "I'm on the left."[9]

On July 22, Zedd wished her a happy birthday via Twitter.[10]

I Want You to Know Edit

Main article: I Want You to Know

The single was released on February 23, 2015, and features vocals from Gomez. 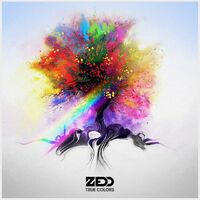