Zedd True Colors[1] is a full-length documentary revolving around Zedd and his second studio album, True Colors. It was directed by Susan Bonds and Alex Lieu[2] and was premiered at the Los Angeles Film Festival on June 2, 2016.[3]

A countdown hits zero and EDM fans hit the ground running, scouring the city for clues to be the first ones to get exclusive passes. Their destination? They have no idea. Embark on a journey with multi-platinum, Grammy winning, electronic dance music artist Zedd. From his classically trained roots, to his brief career in a metal rock group, to stepping on the stage of the biggest music festivals in the world, Zedd has shot up the charts to mega-pop stardom. Ride along with some of Zedd's most passionate fans as he explores new territory with his latest album, 'True Colors', and meet him as they did – up-close, personal, and performing like you've never seen him before. TRUE COLORS is your VIP ticket to venture deep underground into a giant cave formed millions of years ago, to walk the haunted hallways of the infamous Stanley Hotel, to sit around a blazing fire in Joshua Tree under a canopy of stars, to get immersed in complete darkness inside the defunct hospital ward on the top floor of the Alcatraz prison complex, to take a helicopter ride along the Colorado River as it carves its way through the Grand Canyon, and to shoot up to the top of the Empire State building on an incredible adventure plunging us deep into the world of Zedd, his music, and his intimate thoughts. TRUE COLORS is about mor than the making of an album and an epic world tour, it's a story about the unique relationship between a musician and his fans, and the journey of an artist finding his own voice.[4]

The documentary's trailer was released onto YouTube on May 25, 2016. 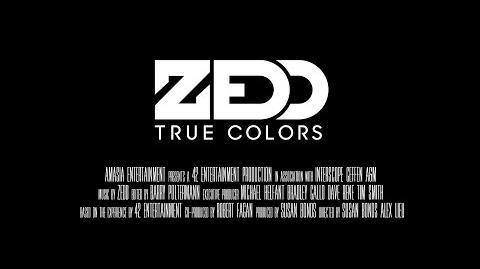 Retrieved from "https://zedd.fandom.com/wiki/Zedd_True_Colors?oldid=9143"
Community content is available under CC-BY-SA unless otherwise noted.